For a number of years, the In/Words editorial team (or a group of people relatively associated with In/Words Magazine & Press) has been organizing a reading series and open-mic in the basement of The Clocktower Brew Pub on Bank Street in the Glebe, usually on the last Wednesday of every month. In its current formation, it seems the entire editorial board takes a role in organizing and hosting the evening in the dark bar basement. For the event in November, a significant line-up of widely-published poets as well as a musical act promised an interesting evening of poetry at a reading series that usually finds comfort and community with university student features.

As a new (or very, very infrequent) feature to this reading series, some live music performed by Scary Bear Soundtrack greeted the audience as they arrived, ordered drinks, and chatted. For a reading series that operates out of a bar basement and that starts at 9PM, it was unsurprisingly fitting for the musical act to fill the room with some instrumental music while conversation and libations prepared the audience for the reading. Although Scary Bear Soundtrack was performing as a solo act with Gloria Guns playing keys and vocals, the music was upbeat and dreamlike and well suited to set the evening’s mood.

With an abrupt cut from the musical performance, In/Words editor Drew Douglas jumped on the microphone to introduce the evening’s first reader and guest opening act, Mike Caesar. While Caesar’s poetry plays with rhyme and assonance, which keeps his largely narrative poems interesting, the performance of his poems are fairly straightforward. Reading off a page, Caesar’s deep voice makes his poems interesting in the way that it emphasizes the delivery of every single word, much in the same way that everyone is interested in Morgan Freeman’s naturally intriguing speaking voice. Yet, Caesar’s best performance is saved for the end of his set when a poem briefly lists words used to describe wine, such as “barnyard” or “plonk.” Overall, Mike Caesar’s articulate poems made for an interesting opening to the night’s poetry and performance, and, while he is a fine reader of his own poetry, the craft of the poem on the page had to carry the weight of Caesar’s reading in general. 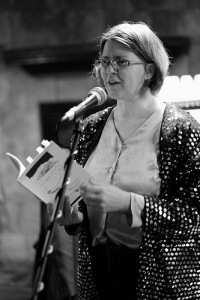 Either in the organizers’ efforts to share hosting responsibilities, or as a representation of who coordinated which reader’s appearance at the reading, Sanita Fejzic introduced the night’s featured reader, Pearl Pirie. Sanita prepped the crowd with a pleasant personal anecdote on how she met and came to be familiar with Pirie, who was also launching a new chapbook with In/Words Magazine & Press, titled Please don’t tickle the salamander’s belly. As a relatively experienced poet and reader of her own poetry, Pirie seems fairly set in her performance style; she appears to know her poems well and reads quickly though moments of quick wit and punchy humour (i.e. “… never schedule a haircut / while your stylist is going thru a divorce.”). Pirie also keeps her banter between poems to a minimum, largely keeping attention on the poems rather than getting derailed on personal anecdotes, thoughts, or updates on the news or whatever; however, Pirie did share an amusing anecdote on a review of her BookThug collection, the pet radish, shrunken, who thought the title (and title poem) of the collection was a reference to the testes.

Nevertheless, it is the interest in sound and word play that keeps Pirie’s poetry and performance interesting. As a poet who seems to always have new work in the form of a new collection or chapbook, it was nice to hear Pearl Pirie read again from the pet radish and her Shreeking Violet chapbook (which was briefly reviewed by rob mclennan here). After Pirie ended her reading, In/Words editor Jennifer Greenberg plugged the upcoming launch of In/Words Magazine 15.1 before beginning a short break in the evening, allowing for the audience to take a breath and absorb the readings from the featured readers. Douglas also jumped on the mic again to provide a short bio of Scary Bear Soundtrack who once again filled the break with their synth-driven shoegaze.

The Reading Series, with its association to the Carleton University-based In/Word Magazine & Press, has a regular crowd of young poets and performers who are themselves students of Carleton U. In the open-mic, some poets, like Jeremy, have ongoing jokes with members of the audience, like the consistent request of Jeremy’s popular Sea World poem. Another occasional attendee and open-mic reader, Asm, shows up to blow the room away with his undeniable adoration of the art and craft of poetry. Open-mic readers like Asm can make the room blush and really appreciate the existence of poetry readings with open-mic segments. Other readers, like “Dante” or the misnamed Greg, can break out surprising open-mic performances that display real humour from a younger ilk of current writers. However, these performers either lack the confidence or for some other reason always undercut their intelligence either in the introduction to their open-mic performances or in their strict rhyme structure or simplistic poem composition. This is why local poet Ian Martin is one of the most interesting writers attending The Reading Series; not only is Martin writing tight, image-driven poetry, but he also seems to continue experimenting and uses open-mics to try out these experiments, such as his use of this month’s Reading Series to try out a humourous script.

In the end, In/Words’ The Reading Series is a fine and fun event, usually with a young and lively crowd who are generally respectful of and interested in the readings of feature and open-mic readers. Check out Pearl Pirie’s apt summary of the November event (with pictures!), and look out for the next iteration of The Reading Series in January.